[From the book Curtis Fields: A Lifetime in Art. You can read more about this book here.] 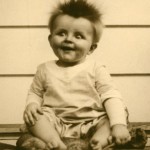 Lying in bed at age five, charged with taking a nap, it occurred to me that my room needed decorating. I got up and found a pencil. I drew a long, continuous scene of cars going up and down hills. I drew it all the way around the room. This early evidence of an artistic leaning earned me a spanking. I put further drawings of cars on hold. 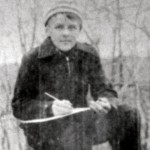 As time passed, I visited my extended family in Woodstock, Vermont. My subject matter shifted to houses and barns, horses and pastures. One painting, done in my teen years, very nearly didn’t survive. I tossed it in the trash during a studio cleanup in the 1950’s. My wife Veronica rescued it. She hadn’t seen it before, and thought it had a certain charm.

I entered Yale in 1939 with the intention of becoming a mechanical engineer. It wasn’t my idea. My father, having struggled during the Depression, felt mechanical engineers had a significantly better chance of survival than painters. At the conclusion of my first year I once again visited my Vermont relatives. One evening I saw a gorgeous, heart-stopping sunset. An inspiration struck me. 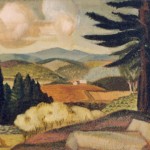 This was not good news to my father. Nevertheless, the following fall I became an art major. The wisdom of my choice became abundantly clear when I walked into my first life-drawing class. I could hardly believe my luck. A woman! Stark naked! 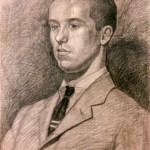 Being terrible at sports I concentrated all my spare time on drawing. Witness my 1942 pencil portrait of classmate Roger Loughney. Realism was king at the Yale Art School, which insisted that every student learn to draw accurately.

When it came time to paint my senior thesis, did I paint a realistic picture of a classmate? No, I did not. Instead, I painted a large canvas depicting six realistically rendered nude females around a sylvan pond. 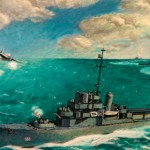 War came, I graduated early, I entered the Navy. After spending a year and a half aboard a destroyer escort in the Pacific, including dodging kamikazes, I was sent back to the States for flight training. My training career was brief. Despite crashing twice, I hung on until the whole thing came to an end with the dropping of the A-Bomb.

Fresh from the Navy, I married my first wife Shirley. We found a cold-water flat in New York next to the Third Avenue “El”, and I set about continuing my art training on the G.I. Bill of Rights. Still in my naval uniform, I called on Stuart Davis, an artist I much admired, and asked his help. He recommended I attend the Art Students League and study with a Czech-born abstract painter named Vaclov Vytlacil.

The Art Students League was a haphazard place. There was no curriculum. Students simply picked the instructors they wanted. It was a kind of popularity contest.

I had picked Vytlacil, of course, and later on I picked Will Barnett and Cameron Booth. All were great teachers. Later I took night courses at Cooper Union and at the New School for Social Research, where I studied with Alexei Brodevitch, then art director of Harper’s Bazaar. 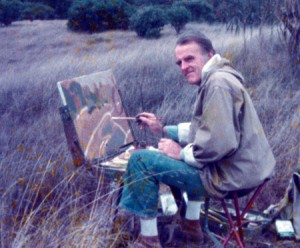 In 1949 Shirley and I went on a hitchhiking tour of France. We used the old scam of having Shirley thumb while I hid behind the nearest bush. One day a Monsieur de Bolli was kind enough to be tolerant of our ruse. He gave us a ride, and as a bonus, turned out to be a well known art critic. I showed him some watercolors I had painted on our travels. He liked them, and wrote on the back of one of them the name and address of someone he thought I should meet. The name: Georges Braque.

A week or two later I went to the Paris address he had given me. Trembling, I rang the bell. The door opened, I saw a magnificent Braque on the wall. My brush with greatness, however, was not to be. Monsieur Braque was not at home.

In 1951, still in the cold-water flat, I managed to wangle a job with the U.S. Information Service. My title: Assistant Exhibits Officer. My assignment: Paris! My boss was Paul Child, and his boss, or rather his wife, was the soon-to-be-world-famous Julia Child. I spent two years learning more about France, and more about good food, thanks to Julia. During that time I also had a one-man show in a small Left Bank gallery.

By 1956 I was back on this side of the Atlantic again, working in an ad agency in Montreal. It was a stressful period: Shirley and I had two children, yet were separated, and ultimately divorced. As a diversion, on weekends I went painting in the countryside. The Rouge River west of the city was a special place for me. One afternoon, as I wiped my brushes on a big rock near the river bank, I discovered I was not the only artist who found the view appealing. The rock was covered with splotches of oil paints from the generations of painters who had preceded me.

During this period I met and fell for Veronica. When the weekends arrived, we would drive down to Saranac Lake in upstate New York, rent an aluminum canoe for $3, and set up camp on some likely looking island in the middle of the lake. Then I would start painting. 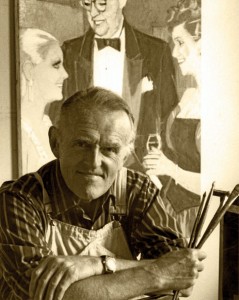 One productive Sunday afternoon, as I was finishing my second 20 x 24” oil, it started to rain. We broke camp in a hurry and launched the canoe. I will never forget paddling wildly as Vera huddled in the bow, holding one of my new paintings over her head as an umbrella. Happily, that same painting ended up in a one-man show at the Montreal Museum of Art.

By 1960 Veronica and I were harmoniously married, had two boys, and had moved to San Francisco. There I continued my double life, agency art director by day, painting nights and weekends. It wasn’t long before we joined three other couples in buying a property in Sonoma County, an hour and a half north of the city.

I found the countryside inspiring. Each weekend I sallied forth with my paints, sat on my little stool, baking in the sun or shivering in the cold, and obsessively painted one, two, sometimes three canvasses full of the rich colors of Sonoma’s vineyards, hills, and orchards.

Nowadays I tend to work mostly in my studio, often creating larger works based on earlier smaller ones. I’ve also painted two series of figure paintings, Swimming Pools, and on a more satirical note, Social Notes. Some years ago I added monotype printing to my repertoire. My press fills up much of our garage, but it’s well worth it. Print-making is a joy.

Through it all I’ve participated in many exhibitions and carried out a number of landscape and portrait commissions. It’s been a wonderful life.